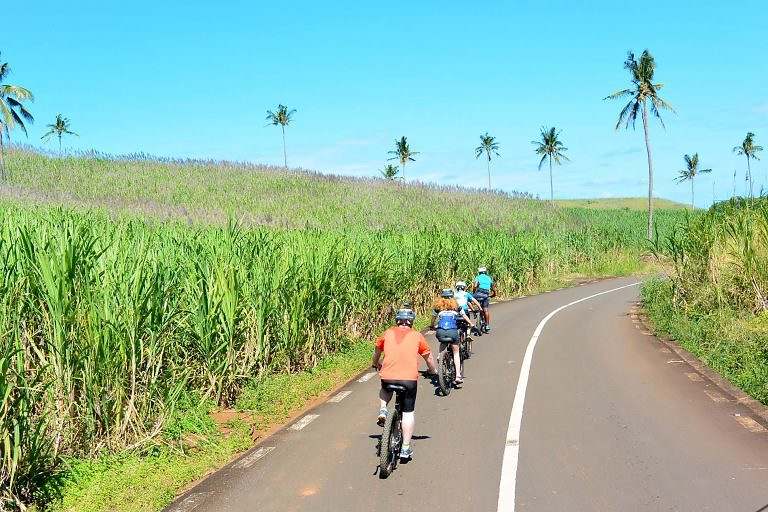 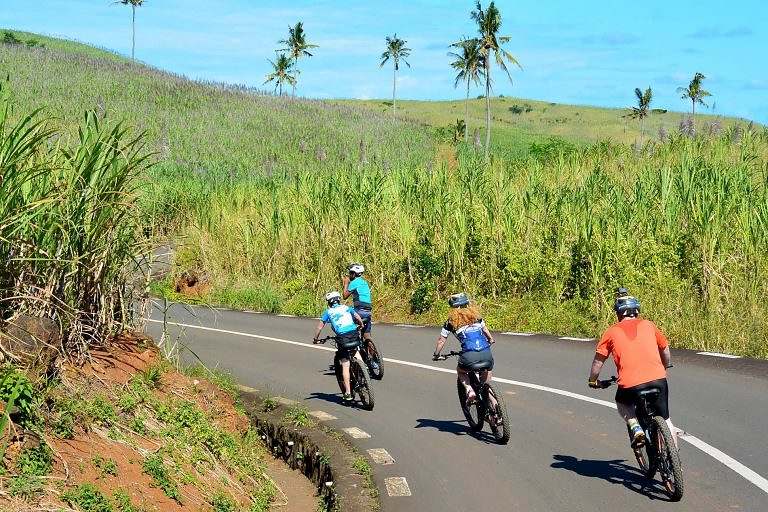 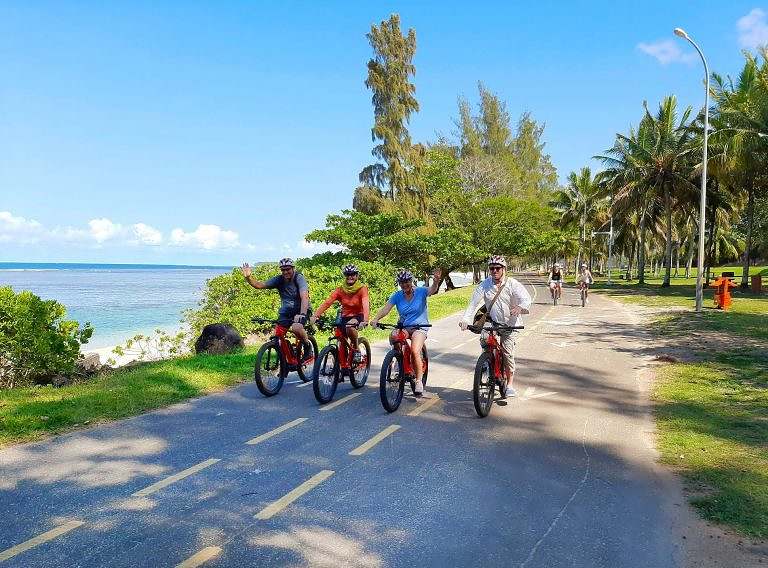 How about discovering Mauritius in its most authentic way? DunienZîl invites you to live a unique adventure, in search of the real ‘Moris’ (Mauritius). At the enjoyable pace of power-assisted cycling, let’s get away from clichés and popular tourist activities to better explore the hidden face of Mauritius. Let’s go through the undergrowth

DunienZîl accompanies you by electric bike for an unusual journey in the north of Mauritius. This journey linked, among others, to the theme of sugar will no longer have any secrets for you. L’Aventure du Sucre is a museum that details the steps needed to get sugar. Visiting Mauritius by bike during your stay will allow you to ride on the sugar cane trails in an incredible nature … 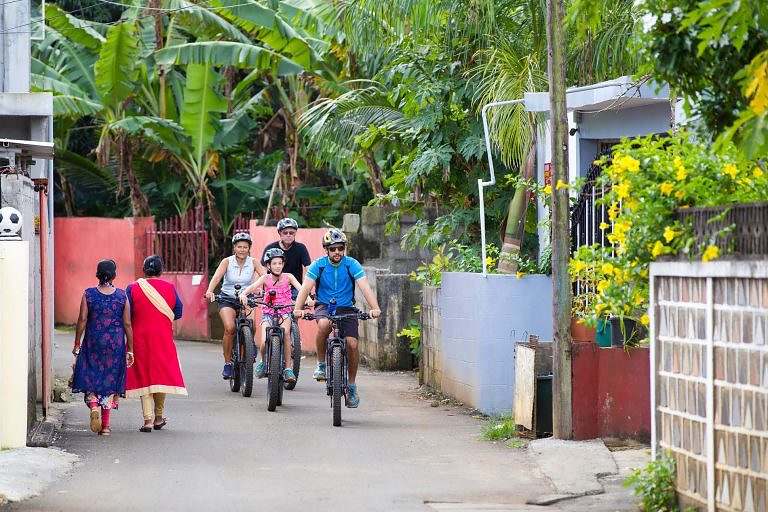 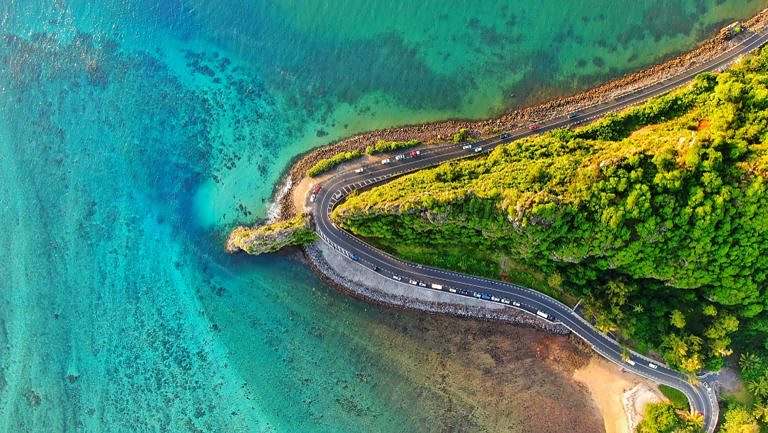 Walk at The Morne

DunienZîl invites you to visit the island by electric bike along the most beautiful west coast of Mauritius. An experience rich in sensations, where the authenticity, the beauty of the Mauritian landscapes and the wild nature will be the main actors of this charming journey. As you follow the itinerary by electric bike, you will pass through the coastal villages of Mauritius, where fishermen …

DunienZîl takes you to visit the south-east coast by electric bike. Rich in history, the Grand Port region, is considered to be the cradle of Mauritian history. Only monuments or ruins bear witness to the past. (Grand port was the main port of the island before it moved to Port-Louis. It was here that a fierce naval battle between the English and the French took place.) … 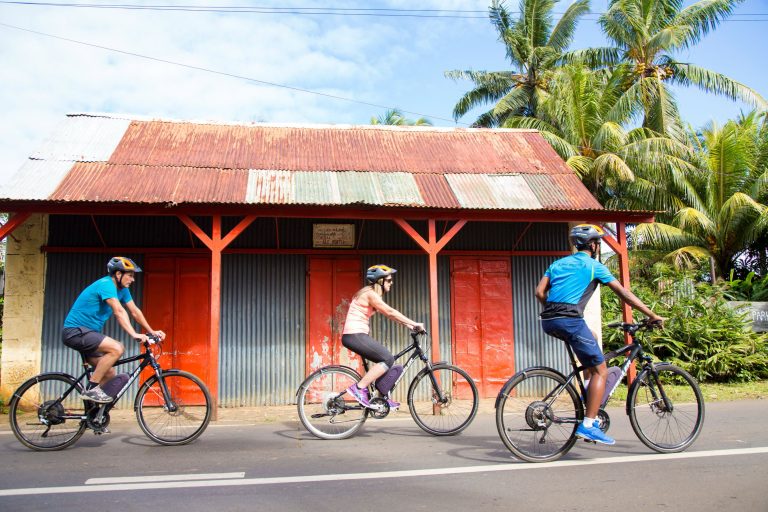 Our electric bike tours in Mauritius.

The electric bike is a great way to explore Mauritius because it allows you to travel long distances with a minimum of effort, thanks to its electric motor that provides a non-negligible assistance when you need it. DunienZîl, a professional in this field, offers exciting excursions accessible to all those who want to ride an electric bike off the beaten path. Follow our trustworthy Mauritian guides who will be pleased to share their knowledge and take you to unusual places to meet local residents and learn about their way of life and the Mauritian culture. Our electric bikes will allow you and your family to be closer to these sublime landscapes between mountains and lagoon.

The regions to visit by electric bike in Mauritius

The west coast of Mauritius is rich in hikes particularly suitable for electric bicycles. The nature, rather dry because of its warm climate, reminds singularly that of the African savannah. Unfortunately, some areas are only accessible from October 1 to May 31, being open for hunting for the other 4 months.  The domain of Yemen, covered with tall grasses and yellowed by the sun is one of them. The Acacias, trees with big tangs that can be found in Africa, completes this fascinating landscape that you can contemplate during our guided tour on an electric bike; circuit inaccessible by car.

The Morne peninsula, further south, is known for its mountain Le Morne Brabant and its sad history linked to slavery and maroon slaves. International symbol of the fight for freedom, this mountain was inscribed on the World Heritage List by UNESCO in 2008. At the foot of this majestic mountain lies Le Morne village, worth visiting. The winding road that runs along the lagoon to Bel Ombre is one of the most beautiful circuits in Mauritius. The stretch near the Macondé promontory ranks 10th in the ranking of the 10 most beautiful roads in the world. DunienZîl could not resist long before putting together a guided electric-bike tour of this region that will bring you to the heart of the Mauritian authenticity, while driving on one of the most beautiful roads of the world.

The region of Chamarel, located on the heights, is the green lung of Mauritius. Its lush forest and natural sites are so beautiful that they are well appreciated by a large number of  tourists looking for a true tropical discovery. Chamarel is particularly known for its Seven Colours Earth, its famous waterfall, its pineapple plantations and its rum distillation plant, but nature remains the main attraction of this endearing region. Thanks to the electric bike, one of our professional guides will make you discover the most beautiful places of Chamarel and of the western region of Mauritius.

Further south, Souillac and its wild landscapes, its cliffs cut by the fury of waves, its rough sea with white foam crests everywhere, are surprising landscapes. We are far from the turquoise lagoon of the north coast of Mauritius when we observe the Gris Gris coast of Souillac. Here, the nature manhandled by the sea and the wind, gradually resumes its rights and offers a unique and exotic landscape. A little further away is the Batelage of la Grande Rivière Sud-Est, the old port of Souillac, the charming Jardin Telfair and other historical heritage sites in Mauritius. The electric bike is the best way to discover these unusual places of Mauritius.

In the north of the island, in the region of Pamplemousses, sugar cane has a preponderant place as one of the last three   sugar factories still in operation in Mauritius is actually in the north. After visiting the surroundings by riding our great electric mountain bike in lovely paths bordered by sugar cane fields, a visit to the “Sugar Adventure” museum is a must. There, the whole history of the sugar industry of Mauritius, its hour of glory and its decline will be explained to you. Not far from the irresistible botanical garden that we will visit stands the most beautiful Château de la Villebague. Many other surprises await you along the way.