The Black River Salt pans – A bit of history

Black River is located in the South West of Mauritius. At the time, it was a secluded place with few dwellings. Today it is very well built and very popular with investors and expatriates who have come to Mauritius. This coast is a key place for tourism. The Beachcomber hotel group is currently building a new hotel at the Black River Salt pans. These salt pans have stopped and have given way to a building complex currently under construction.

The landscape of the Salt pans is changing…too fast…

The Black River Salt pans has a charm all of its own, different from what is frequently found in Mauritius. There is dense vegetation in some places, swamps in other places and virgin beaches. With its lava stone checkerboards, the Black River Salt pans are unique in their kind. Its singular landscape is likely to change completely with the Beachcomber Group’s hotel project, New Mauritius Hotel, its luxury villas and its 18-hole golf course.

Previously, we had to take a dented dirt road, which was buried under asphalt for the comfort of the future hotels and the construction of 220 luxury villas.

A bicycle path and a pedestrian path were created to bring an ecological side and help sportsmen and women to have a place of their own.

In those days, as early as dawn, we could observe the men and women working in the salt pans. These shallow, checkerboard-shaped basins were built of lava stone. The salt was then scooped up with a shovel and put into wicker baskets. The baskets were carried on the workers’ heads and stored in a building. The ancestral gestures of the ‘saunière’ still haunt this place where manual work was difficult but was the pride of Mauritius’ history and the symbol of this part of the island.

In order to understand how salt is formed, seawater must first be pumped and then “released” into the series of basins. As it circulates, it is transformed by the wind and the sun into an aqueous solution called brine. It is then directed to the eyelets (or crystallizers) to be transformed into salt crystals.

We can still see the ruins of the salt pans where the dry crystallizers still remain.

The only salt pans still in activity are the Yemen salt pans at the entrance of Tamarin. A guided tour of the Yemen Salt pans is recommended, allowing us to understand the transformation of salt and to see the ‘saunières’ at work during the harvesting season from September to January. These salt pans in the western region are part of the Mauritian heritage and it is hoped to see them in operation for a long time to come, thus safeguarding this tradition in the Black River region.

A walk at the Black River Salt pans, Mauritius

Mauritians still have some time to fully enjoy this magical place.
Laurent, the children and I decide to take the dogs for a walk at the Pointe des Salines, not far from the Koenig Tower, an abandoned house.

The tide is low and we discover stretches of mud, where migratory birds come to land. This wetland is framed by mangroves that protect the area from erosion and act as a nursery for small fish and crabs.

We walk along the jetty, which I think has been partly developed by the local people or by the organizers of cycling races in the western region of Mauritius.

The fisherman and his board

We meet a gentleman going fishing. The tide is low, he’s put all his gear on an old surfboard. From here, the ocean is out of sight, the blue sky and the view is breathtaking. We have a magnificent view of the mountain of Le Morne Brabant. We really feel at the end of the world, even if we are only a few minutes away from all the hustle and bustle of Black River and Tamarin. I remain contemplative in front of this spectacle. We are in October and the sea is starting to get warm…. Yes, Yes! We don’t have the same notion as our European friends when it comes to sea temperature! Today my sea is about 23ºC and I still find it quite cold.

We continue our journey on this beautiful jetty. I stop to contemplate this majestic mountain of Le Morne Brabant which rises in the distance as well as the whole mountain range of the west of Mauritius. It is really magnificent. The calm of this place is really appreciated.

We meet a couple cleaning the Ashdams in the sea water. They tell me they’re gonna make a salami out of it. I’ve never tasted it, but it doesn’t really give me the desire. The Ashdam or battle axe is a triangular shell buried in the wet sand. It looks like an axe from the Middle Ages and is very sharp. Its flesh is also appreciated by Mauritians who make curry or other recipes with it.

Raphaël has already eaten the mollusc in its raw state, straight from the sea. There is like a scallop in the middle. I’ve never been able to try it… 🤐

Children have fun looking for treasure. Recently, a treasure was found on our neighbouring island of Rodrigue. This story has revived their desire and hope to find a treasure among the rocks.

We had a good time with the family and the dogs at the Black River salt pans, exploring this place that is still wild… But for how much longer?

Do not hesitate to contact us on our EXPLORE NOU ZIL website. We can give you information for your outings in the South West region of Mauritius …
Don’t forget the walks on the heights of Chamarel, in a green and dense landscape, are also to be discovered, or a walk along the wild coast in the south going from Le Morne, via St Martin, Baie du Cap and Bel Ombre. 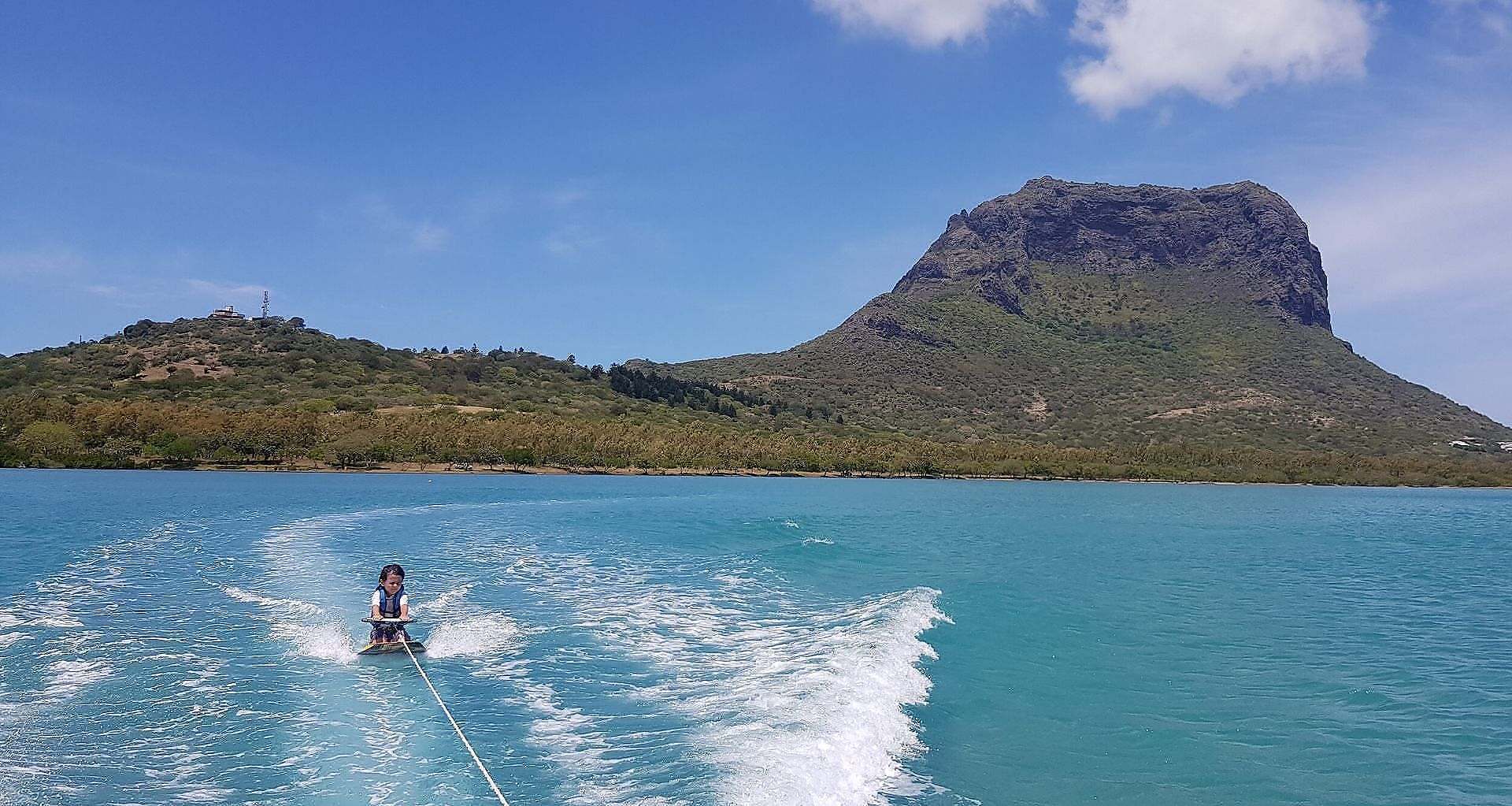 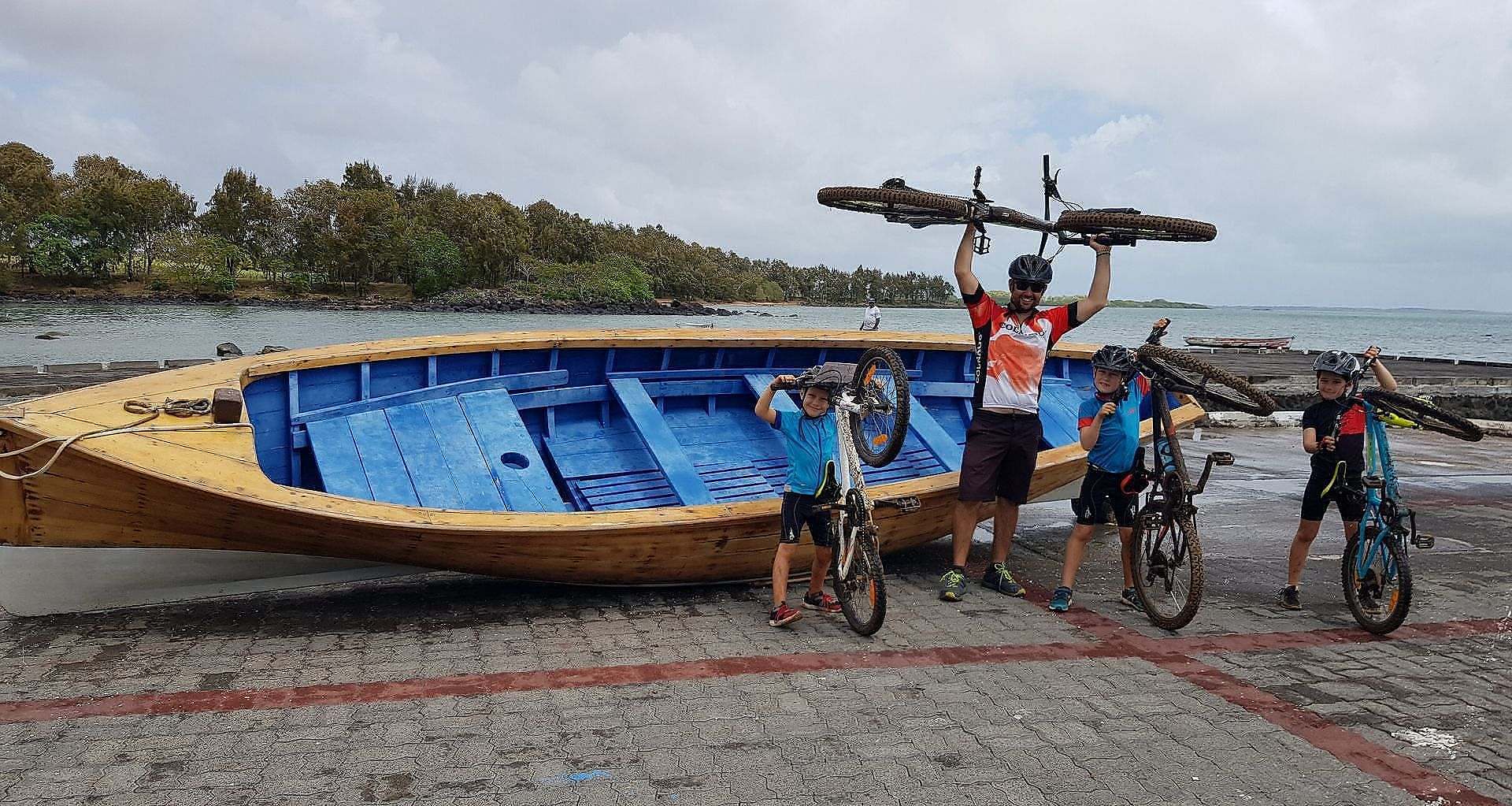 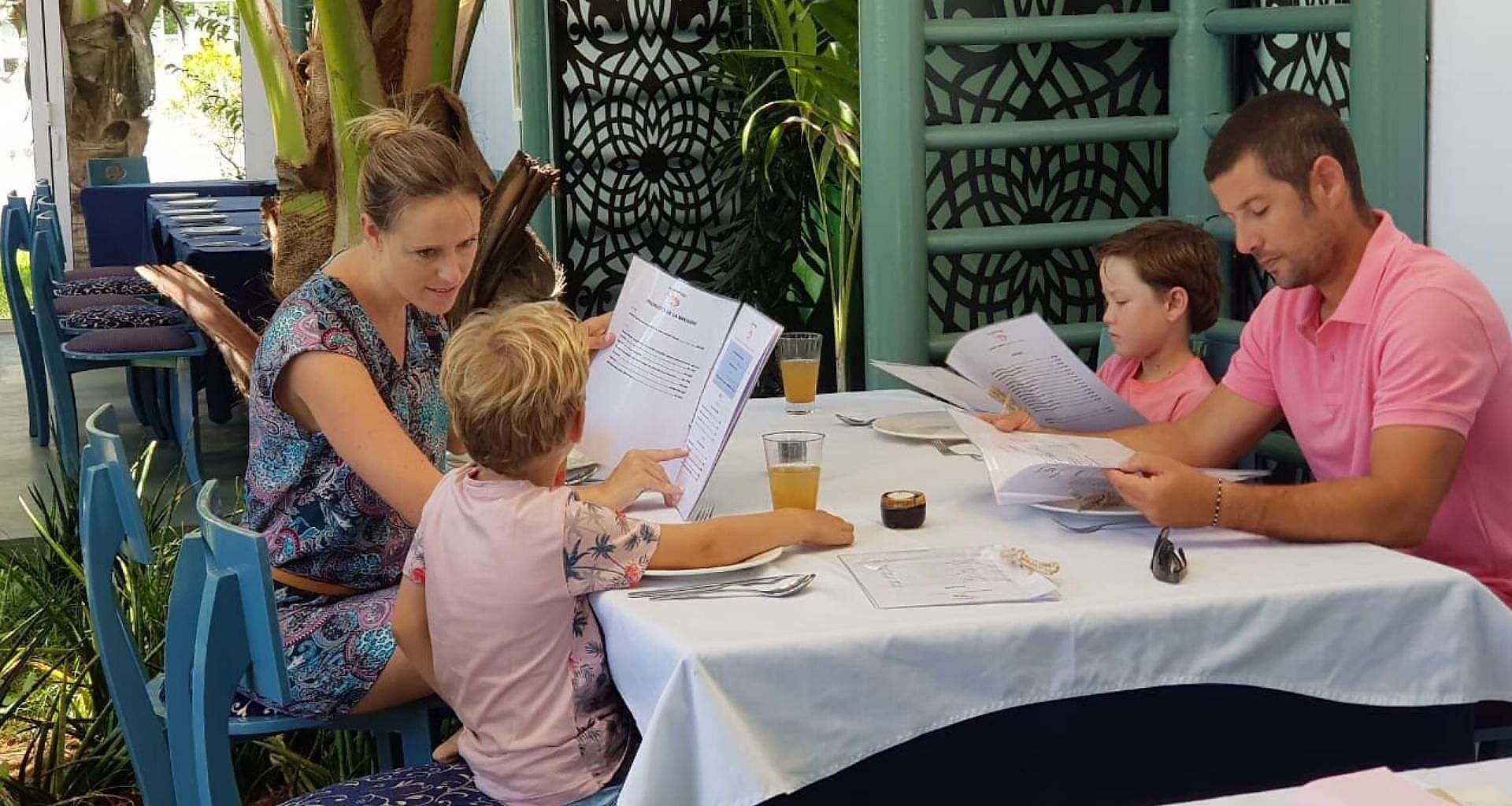 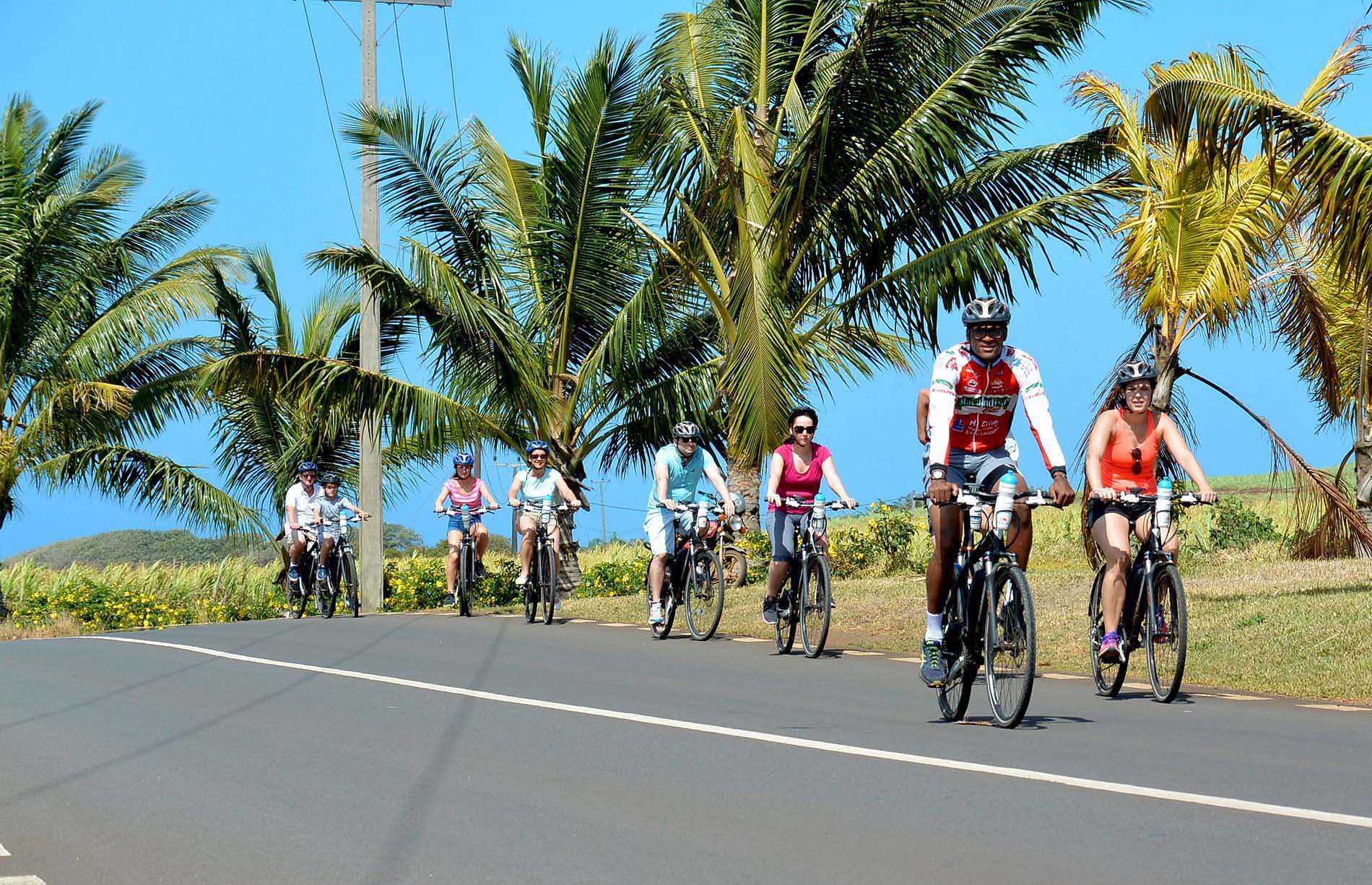 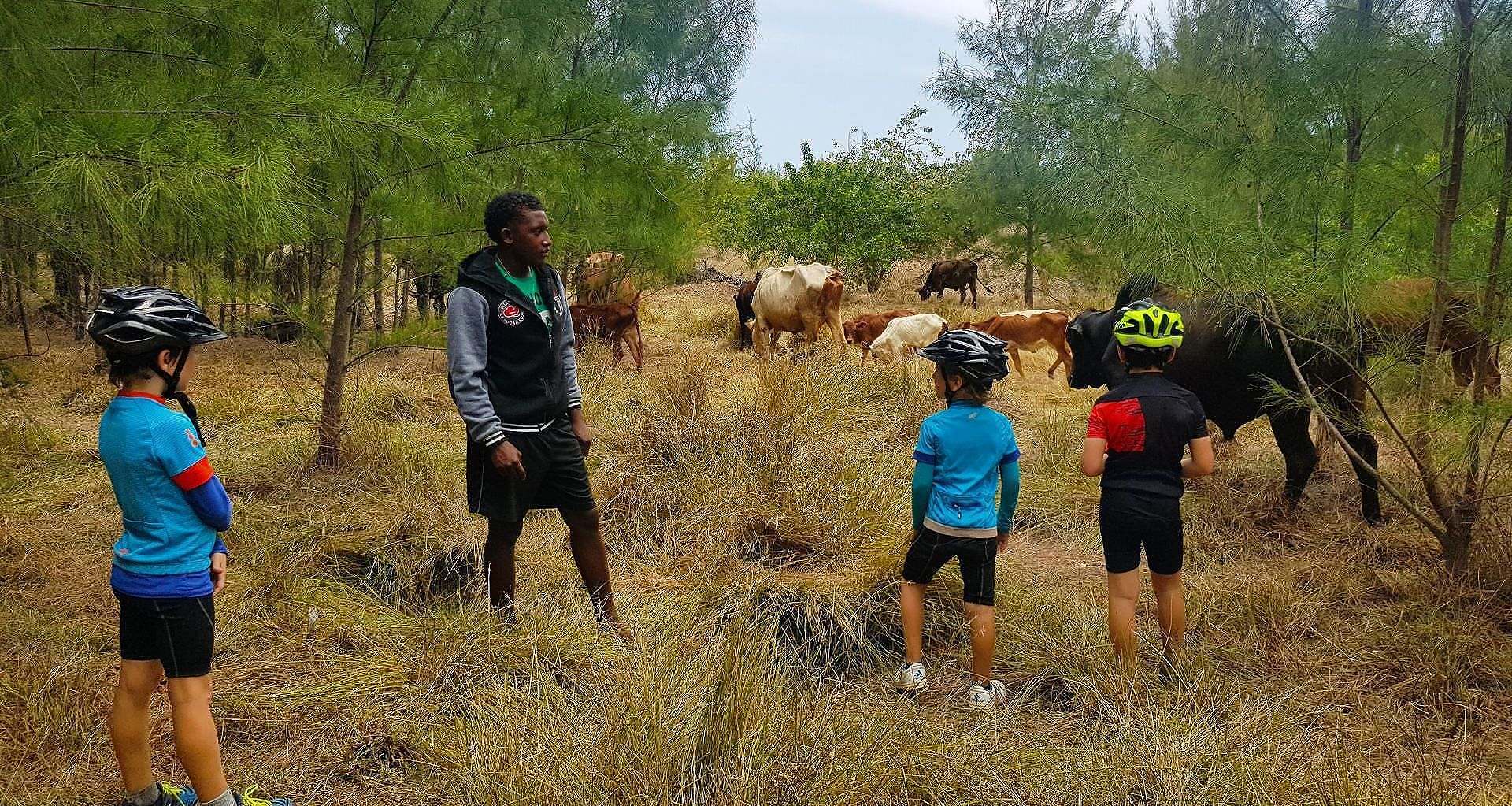 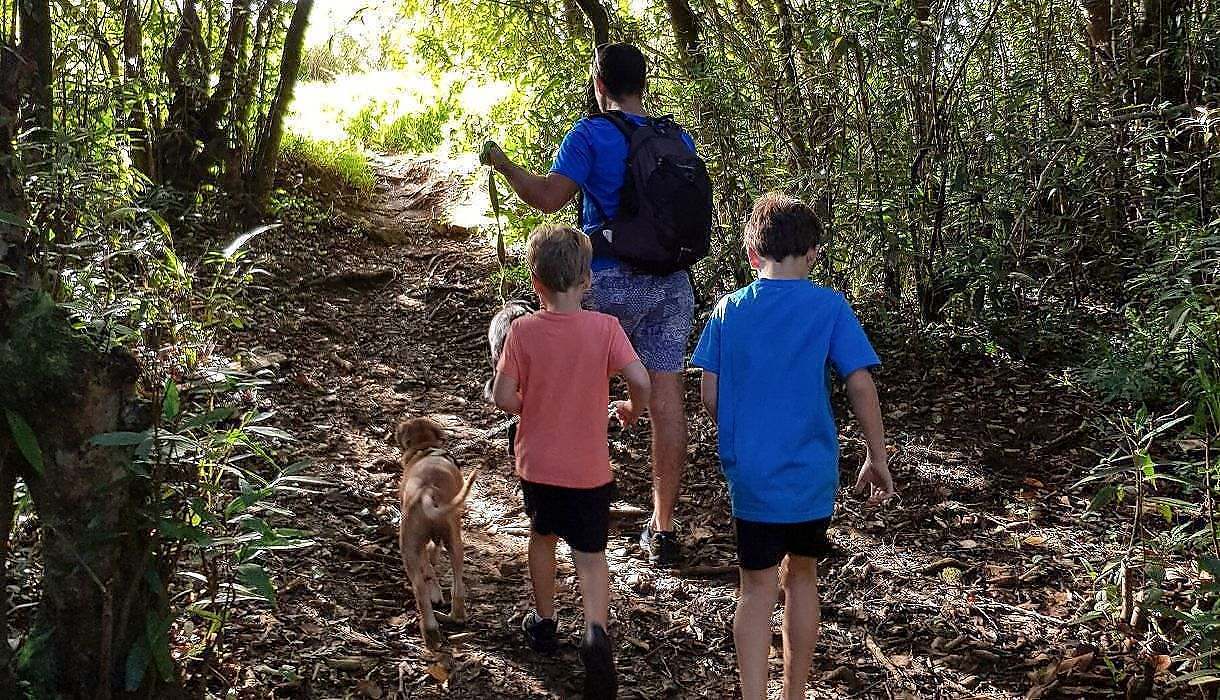 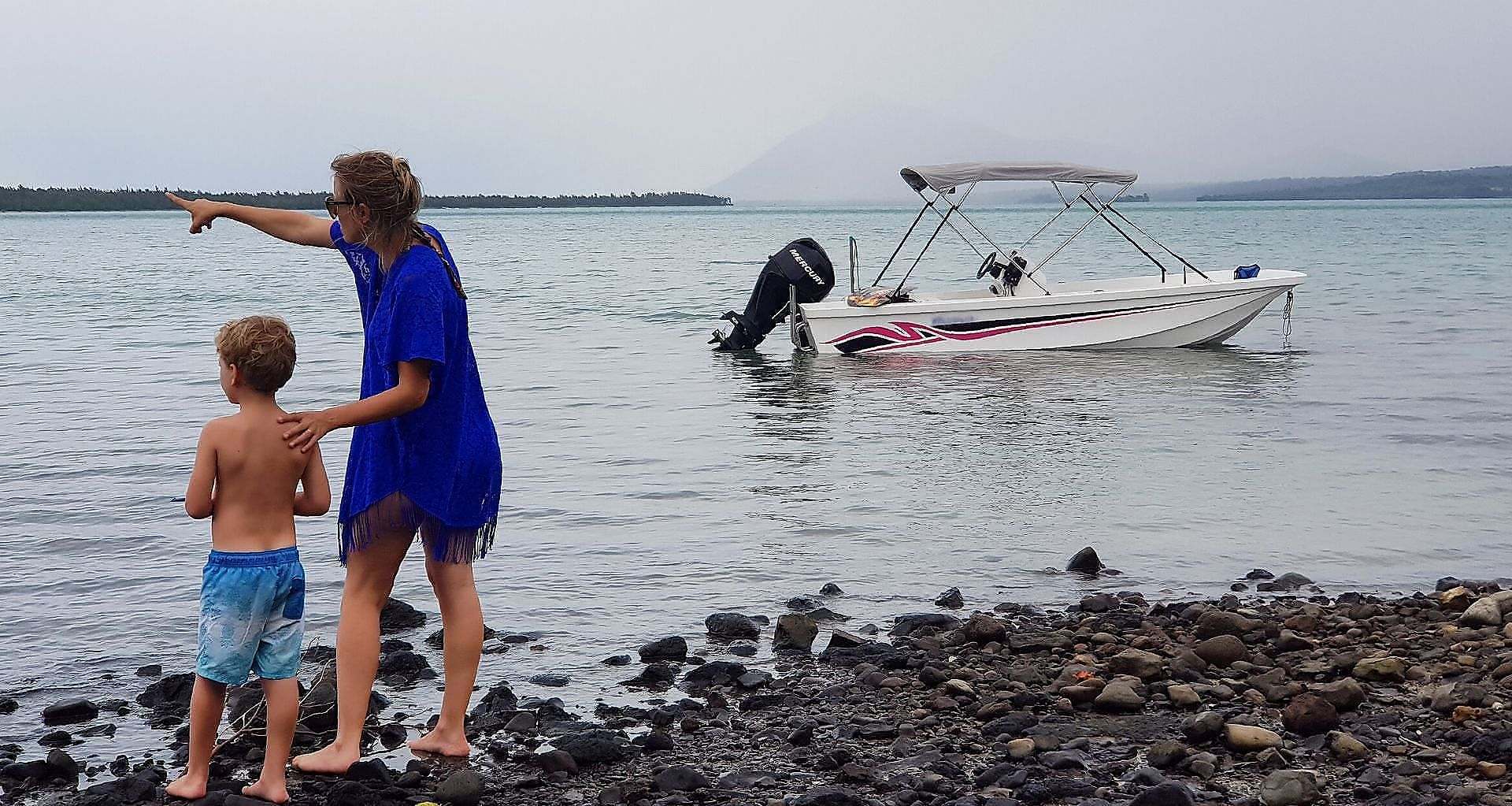